This is the Tesla semi truck… 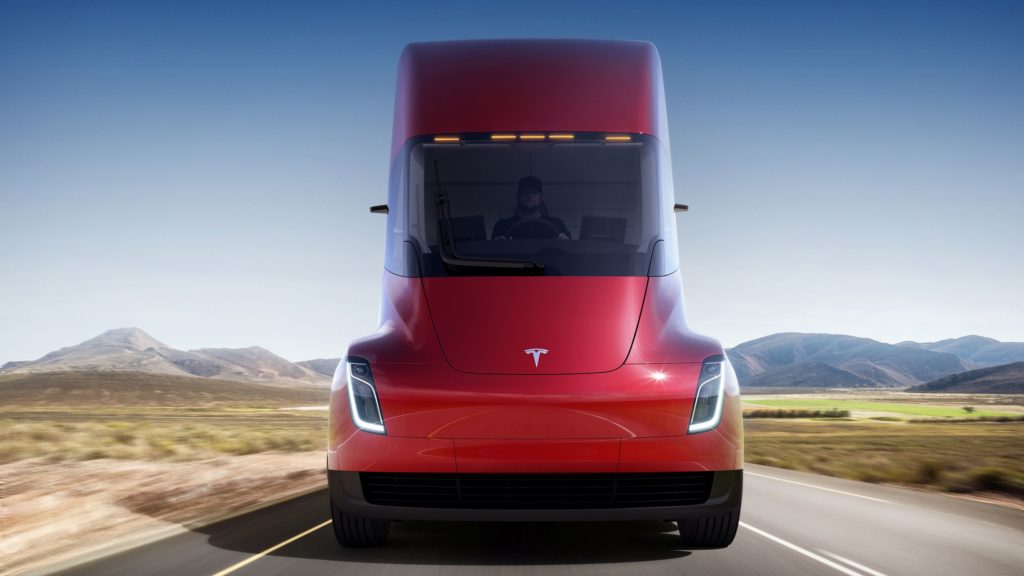 500 miles of range and more aerodynamic than a supercar

The Tesla semi truck is a hulking and menacing hauler, with the presence of Darth Vader lurking from above when cast in the black hue, or more like an apparition in metallic silver-white. In other words: it’s exactly what we expect to see from Tesla, as it attempts to make a semi truck that lives up to the brand’s DNA of making the future seem cool.

I sat in the driver’s seat hours before the truck was revealed at Tesla’s Hawthorne, California facility on Thursday. Apart from the glass area and the two screens on either side, it feels as badass as any big truck. The center-mounted seat, however, does feel weird. I noticed several elements from the Model 3, including a turn signal and gear lever, but it had a different steering wheel since it doesn’t require an airbag.

The center-mounted seat does feel weird

Whether Tesla can actually impact the freight truck market remains to be seen, but design is certainly part of that statement, as Tesla makes it clear that it wants to do things differently — staging a full-scale media event blitz to emphasize that point — it is perhaps the first reveal of an 18-wheeler to take the stage to the tune of trance music. Tesla is taking a page from its Model 3 playbook (a game plan that’s currently a roll of the dice), but it’s one that tends to generate tons of hype and whip the media and Musk fans into a frenzy. 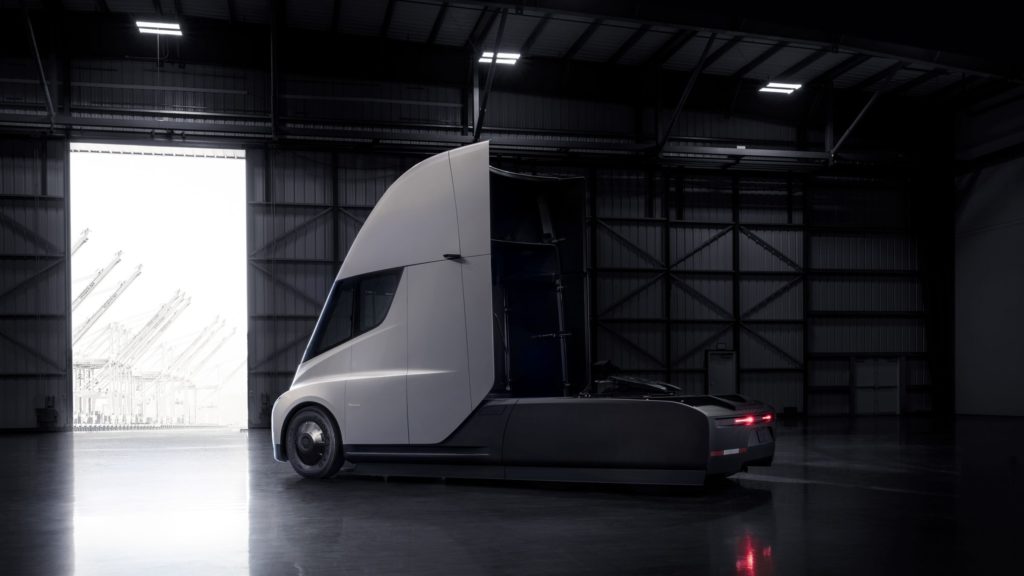 It’s a delicate moment for Tesla, with both fans and investors watching the rollout of its first mass-market car intensely. Now they are tuning in to see a truck, because it’s Tesla. The usual audience for freight innovation is far more niche. But when Elon Musk talks trucks, his fans whistle and shout.

The reveal event was held in the shadow of two of Musk’s other pet projects: SpaceX’s Falcon 9 rocket and a mile-long hyperloop tunnel. Both served as reminders that this was no ordinary company, and no ordinary truck.

Musk appeared Thursday night in Hawthorne, California, to show off his company’s newest vehicle, promising a range in the neighborhood of 500 miles for the Class 8 heavy-duty vehicle. Earlier reports pegged the range between 200 and 300 miles, but Musk delighted in besting those numbers in his remarks, including his claim that the truck has a 400-mile range with 30 minutes of charging. Musk had also promised self-driving abilities, and Tesla says this delivers at least semi-autonomous capability.

Tesla showed not one, but two trucks

In the hours before the official reveal, Tesla showed not one, but two trucks to journalists ahead of the unveiling: a standard model and another with an aerodynamics package. There were tense moments leading up to the reveal, with Tesla employees buzzing around nervously.

The vehicles were parked in a studio facing up to competing diesel-powered trucks from Freightliner and International. Compared to the internal combustion engine models, the Tesla semi has smoothed-off sides covering its electric parts, including the grille up front. Yes, there’s a “frunk” up there, with some storage and access points for some service repairs. The door handles are flush-mounted, too, because they come off a Model 3.

The streamlined look of the Tesla semi truck is made possible by the battery pack mounted under the floor of the cab, and the driver’s seat mounted significantly more forward than of those the Freightliner or International trucks. Behind the cab, the two rear axles have electric motors attached on either side, for four in total. They also come off of existing Tesla models. The design gives the Tesla semi truck a lower center of gravity than diesel-powered models, something the company has said about its cars relative to rivals with internal combustion engines. While this is unlikely to make a semi truck handle like a sports car, it may go some way toward increasing high-speed stability.

Inside, a driver’s seat is centrally mounted with a passenger’s behind and to the right of it. This contrasts with the conventional trucks that have two seats mounted side by side, but with little room left in the cab for other storage. Tesla designers say they maximized the space left over from the battery pack’s positioning to create more space to walk around inside, as well as creating more storage — something decided after the company spoke to commercial truck drivers. There isn’t a version with sleeping accommodations, however, but it sounded like a future model change might include this feature. 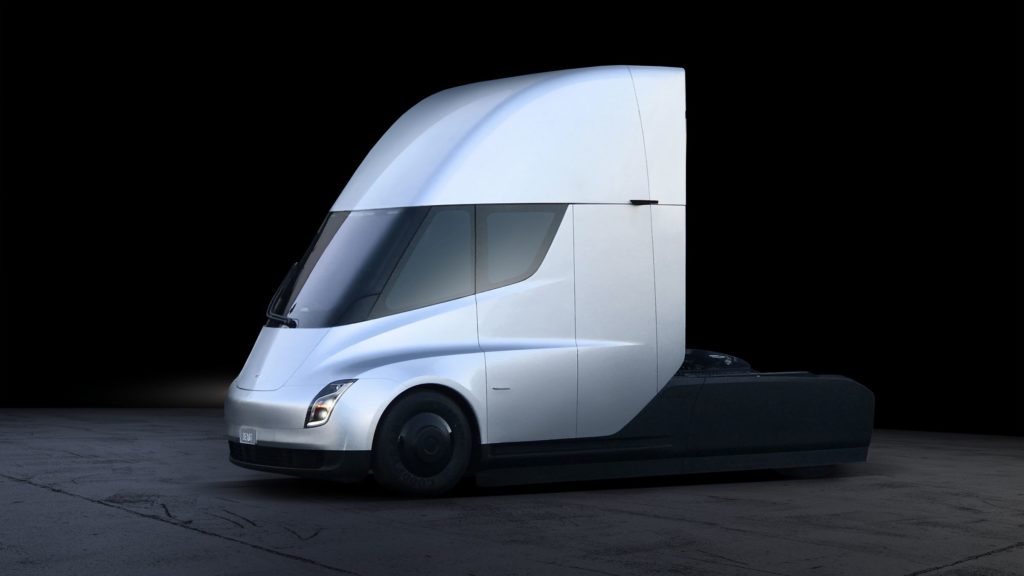 Two screens dominate either side of the steering wheel, also from the Model 3. On the semi truck, however, the screen to the left controls vehicle functions and settings specific to the trunk portion, while the one on the right has more typical navigation and radio controls. A Tesla official indicated those could be made more configurable in the future.

While there are large, conventional truck mirrors mounted outside the vehicle, each interior screen shows images of the sides of the truck through cameras mounted under the exterior mirrors. Tesla says those are part of the Autopilot system (there are also forward-facing cameras mounted at the base of the windscreen), but they will likely help drivers get used to sitting in the middle of the cab.

After the reveal, it’s clear Tesla hopes its innovative packaging and approach will resonate with truck drivers and fleet managers who are tired of the way the vehicles have been designed for decades. After all, it won’t be alone in the electric truck market. Companies with experience in large trucks, such as Cummins and Daimler, have already announced plans for electrified models, with immense pressure coming from cities and countries anxious to reduce air pollution in heavily populated areas. 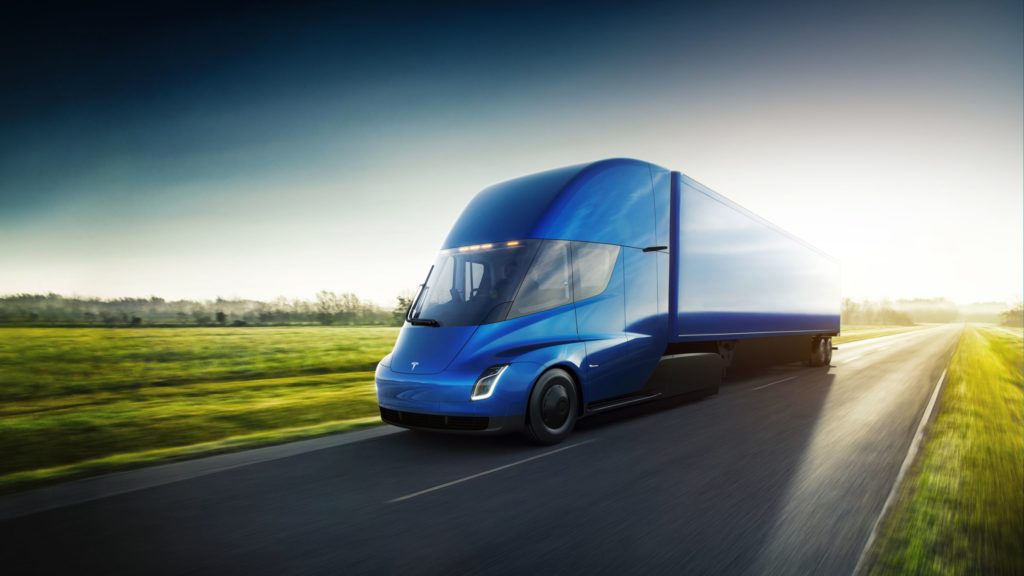 The appearance of a large truck that breaks into completely uncharted territory for Tesla comes at a time when its last big announcement, the Model 3 sedan, has yet to be delivered to the roughly 500,000 customers who’ve paid $1,000 to reserve the car. Tesla and Musk have been on the defensive over the last several weeks after admitting to “production hell” at the Fremont assembly plant and the Nevada Gigafactory, where the batteries are assembled. Model 3 production hurdles were one of the reasons given when in October Musk postponed the semi truck reveal to this evening. Tesla also reported earlier this month its worst financial quarter ever, losing nearly as much money so far this year as it did in all of 2016.

Telsa has already secured an order for four of its trucks from Meijer Inc, the big-box chain headquartered in Grand Rapids, Michigan. Each reservation required a $5,000 deposit, according to Bloomberg.

What Tesla has done today is shown that it wants to invigorate a segment, rather than just make something to comply with more stringent emissions regulations. Through the design and packaging alone, Tesla is applying some of its most notable brand cues to a type of vehicle it’s never made before. And in the process, it’s trying to do for heavy-duty commercial vehicles what it did for luxury cars — plough forward in its own lane.