As part of this month’s update, a new Excel feature gives you the ability to personalize the default layout for your PivotTables. Enabling users to personalize the PivotTable defaults started as a feature request in our Excel UserVoice forum. Now, when you’re building complex reports or performing one-off analyses, you can quickly get started with your favorite PivotTable layout. This feature is available for Excel 2016 on Windows as part of an Office 365 subscription. If you are already an Office 365 subscriber, find out how to get the latest update.

This month, we also included a tip when using OLAP connections to make your PivotTables much faster. Read on to learn more. 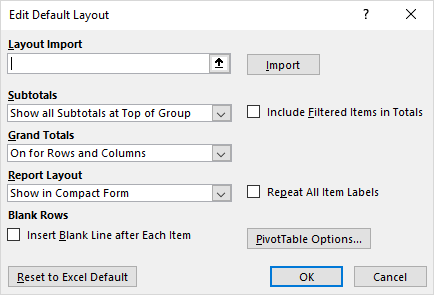 Either way, all new PivotTables you insert will have your favorite layout!

To learn more about how you can use this new feature, visit our support page.

If you use OLAP connections, making a change to your default layout could make the PivotTables you create much faster! Disabling the Subtotals and Grand Totals will help you take advantage of the performance improvements delivered in a previous update to Excel 2016. 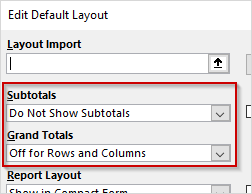 If you have any suggestions for a new feature you would like to see in Excel, head over to the UserVoice forum and become a part of the conversation!