Today at Microsoft Build 2017, we announced new opportunities for developers in three areas—updates to the Microsoft Teams developer platform, new capabilities in the Microsoft Graph and better ways to connect Office users with partner integrations. With over 100 million monthly commercial active users, Office 365 is the largest productivity service available. Office 365 offers an incredible opportunity for developers, with its business-critical data and millions of users, combined with a platform designed to keep people in the flow of their work.

Beginning today, Microsoft Teams is open to all developers to publish apps through the Office Store onboarding and distribution process—enabling them to engage users where they work. Published apps will surface in a new discover apps experience—making it easier for users to add and use apps within Teams. This and other new features are now available in the Developer Preview and coming to users soon.

When we launched the preview of Teams in November, we introduced a deep developer platform with tabs, bots and connectors. Today, we are announcing two new capabilities, available in the Developer Preview, enabling developers to build even more engaging experiences for users.

Compose extensions, in preview, allow users to issue commands to bring information from an app or service directly into their team chat and avoid distracting context switches. 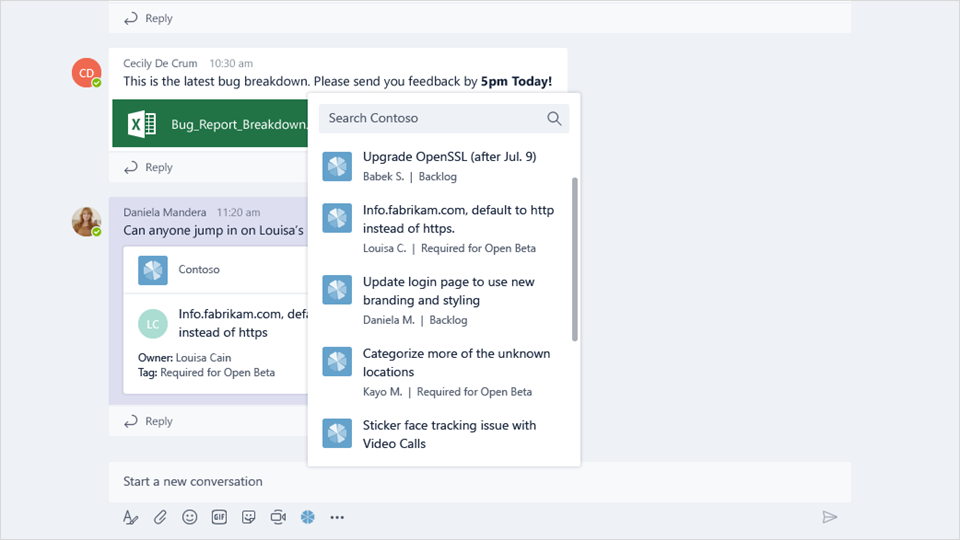 Third-party notifications in the activity feed allow developers to alert users of key information and updates from their service. New Teams APIs are also coming to the Microsoft Graph, in preview, allowing developers to access team and channel information. Developers can now package these capabilities—tabs, bots and connectors, compose extensions, and activity feed notifications—into a single Teams app to make it simpler to publish and manage. At Build 2017, partners such as Wrike, Sapho and Adobe will demonstrate their new Teams integrations.

Discover more about everything new with Microsoft Teams.

In addition to Teams-specific updates, there are many new opportunities to customize Office applications. Earlier this year, Office add-ins became available on Mac and iOS clients, making any add-in seamlessly exposed across many platforms. Today, we’re announcing expanded JavaScript APIs in Word and Excel, in preview, which let developers access and extend structured data within documents. We’re also previewing an easier, integrated sign-on system that streamlines the use of services such as Microsoft Graph for both developers and users.

Artificial intelligence and data can help your applications become more engaging and focused. On stage this morning, we demonstrated the upcoming Presentation Translator add-in, which leverages Microsoft’s translation APIs in PowerPoint, giving presenters the ability to add subtitles to their presentations in the same language or in different languages. Read more about the Presentation Translator and sign up for an early access.

Similarly, developers can integrate intelligence and data from around their organization to enhance the user experience and build focused business processes using the Microsoft Graph.

With brand new capabilities in addition to an expanding API set, Microsoft Graph is truly the ubiquitous API for accessing core data in an organization, and is critical to any business process or app. Today, the SharePoint site, OneNote and Planner data APIs are generally available and are ready for developers to use in production.

We are announcing new Insights APIs, coming soon in preview, which will let developers build smarter processes by leveraging relationships between users and documents. We are also expanding the library of webhooks, in preview, which includes user and group changes.

These actions and activities can be orchestrated with Microsoft Flow. With Flow, every user can add actions and conditions in response to operations across Office 365. Developers can extend Flows easily with code hosted in Azure. Today, we are excited to announce an offer for Microsoft Azure ISV customers that enables them to directly provide new PowerApps and Flow Connectors to the broad audience of Office 365 customers. With expanding Microsoft Graph data from across the organization, a great development platform with Azure and native integration of Flow with applications such as SharePoint—it is now much easier to create focused, tailored business processes. 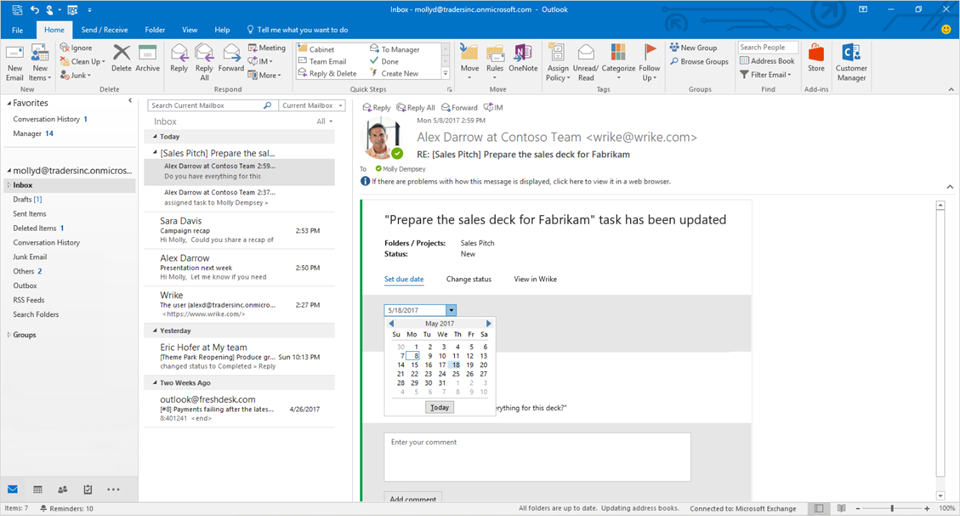 Actionable Messages let you take quick actions right from a conversation in Microsoft Teams and Outlook.

Finally, we are adding several new paths to get apps and add-ins in the hands of users.

Centralized deployment of Office add-ins is currently available in preview, allowing administrators to automatically deploy add-ins to their organization, making selected Office add-ins directly accessible from the ribbon and other key user experiences within Office, with general availability coming soon. Today, we’re announcing that centralized deployment is supported on Office for Mac and Office Online, allowing you to deploy add-ins from the Office Store as well as via a set of deployment scripts.

Office at Build—new capabilities to make every user more productive

For developers, Office continues to grow across all dimensions, with new development scenarios in Microsoft Teams and across Office applications, increased depth and data access with Microsoft Graph, and new ways to reach users with applications and integrations. The best time to transform work in organizations is now. At Build and through our online videos, developers can explore all that is new with the Office platform. Sign up for the Office Developer Program to stay connected to updates across these APIs.