Mozilla was the first major brand to announce it was “pausing” its advertising on Facebook in the wake of the Cambridge Analytica data privacy scandal. Today, the organization announced a new tool it said will help keep Facebook from tracking your browsing across the web.

The Facebook Container add-on for Firefox promises to make it “much harder” for Facebook to track you when you’re not on its site. Mozilla has been working on the technology for several years already, accelerating its development in response to what it called a “growing demand for tools that help manage privacy and security,” according to a statement issued by Mozilla today.

Most people are probably aware that data they directly give to Facebook — such as “liking” a Page or updating their relationship status — may be sold to advertisers. But fewer people know that Facebook can also track their activities on other websites that have integrated with aspects of Facebook’s tracking technology, such as the pervasive “Like” button. And it’s in this scenario that Mozilla is now hoping to play the good guy.

The add-on, which can be installed through the usual means in Firefox, essentially “isolates” your Facebook profile from the rest of your web browsing, meaning you can use Facebook as usual without experiencing the off-site tracking part.

As its name suggests, the Facebook Container add-on is, well, a container — you access Facebook from within a little silo that is disconnected from the rest of your browser. When you install the extension in the first instance, all your existing Facebook cookies and data will be deleted.

When you next go to log in to Facebook, the site will load in a separate blue-colored tab, which serves as the “container.” 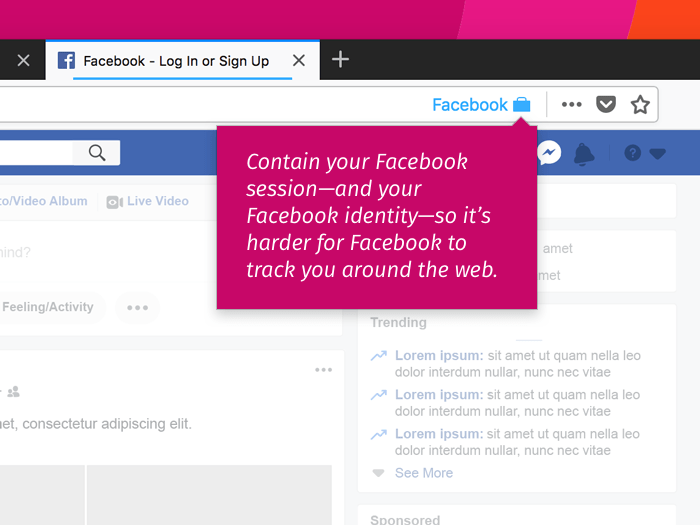 While it’s true that you can already browse privately in Firefox via a “private window,” doing so means that you will access all websites in that mode, not just Facebook. The add-on is purely about keeping Facebook from tracking you passively as you shift from website to website, though as noted it may “break” some Facebook Platform features that you have become accustomed to using on third-party sites. But hey, you can’t have it all ways.

Today’s announcement comes a month after Google rolled out a new filterwithin Chrome to block ads that don’t comply with standards set out by the Coalition for Better Ads. Last week, Mozilla announced its 2018 roadmap for Firefox, which also includes a blocker for “bad ads,” as well as other tools to prevent autoplaying video and provide breach alerts, something the company had previously tested.

The Facebook Container add-on fits into that broader scheme of things, insofar as Mozilla wants to position Firefox as a privacy- and security-focused browser. And what better way to capitalize on Facebook’s current privacy scandal than by launching an add-on that promises to keep the company from tracking you?

“There’s an important conversation going on right now about the power that companies like Facebook wield over our lives,” Firefox VP Nick Nguyen said in a blog post. “These businesses are built on technology platforms that are so complex, it’s unreasonable to expect users to fully understand the implications of interacting with them. As a user of the internet, you deserve a voice and should be able to use the internet on your own terms.”