Calling all Game Developers! GDC 2017 was a blast in San Francisco a couple of weeks ago, so there is no better time to be inspired and passionate about learning and building cool games.

Therefore, I am excited to share that Amazon GameLift is now available for all C++ and C# game engines, including Amazon Lumberyard, Unreal Engine, and Unity, all with enhanced game session matching capabilities. For those of you not familiar with Amazon GameLift, let me introduce this managed service designed to aid game developers in delivering fun and innovative online game experiences.

Amazon GameLift is a managed AWS service for hosting dedicated game servers, making it easier for game developers to scale their game capacity and match players into available game sessions. With Amazon GameLift, you can host servers, track game availability, defend game servers from distributed denial of service (DDoS) attacks, and deploy updates without taking your game offline. The Amazon GameLift service powers dedicated game servers for Amazon Game Studios, as well as external game development customers, and is designed to support session-based games with game loops that start and end within a specified time.

The latest Amazon GameLift release enhances the current functionality of the service, as well as adding awesome new features to help simplify game development and deployment for developers. Let us review some of the cool features of the Amazon GameLift service:

Amazon GameLift does the heavy lifting of tasks once required to create session-based multiplayer games by simplifying the process of deploying, scaling, and maintaining game servers while reducing the time, cost, and risks associated with building the infrastructure from scratch.

The reference architecture of a gaming solution that utilizes the Amazon GameLift would look as follows:

Integrating Amazon GameLift into Your Games

The process of integrating Amazon GameLift into your game build can be broken down in a few simple steps:

Let’s get started putting these steps into practice by setting up the Amazon GameLift Server SDK in a simple game server project using the Unreal game engine.

We start with Epic’s Unreal game engine. For simplicity, we will create the sample Shooter Game project with online multiplayer functionality built-in, and save it locally on the computer. 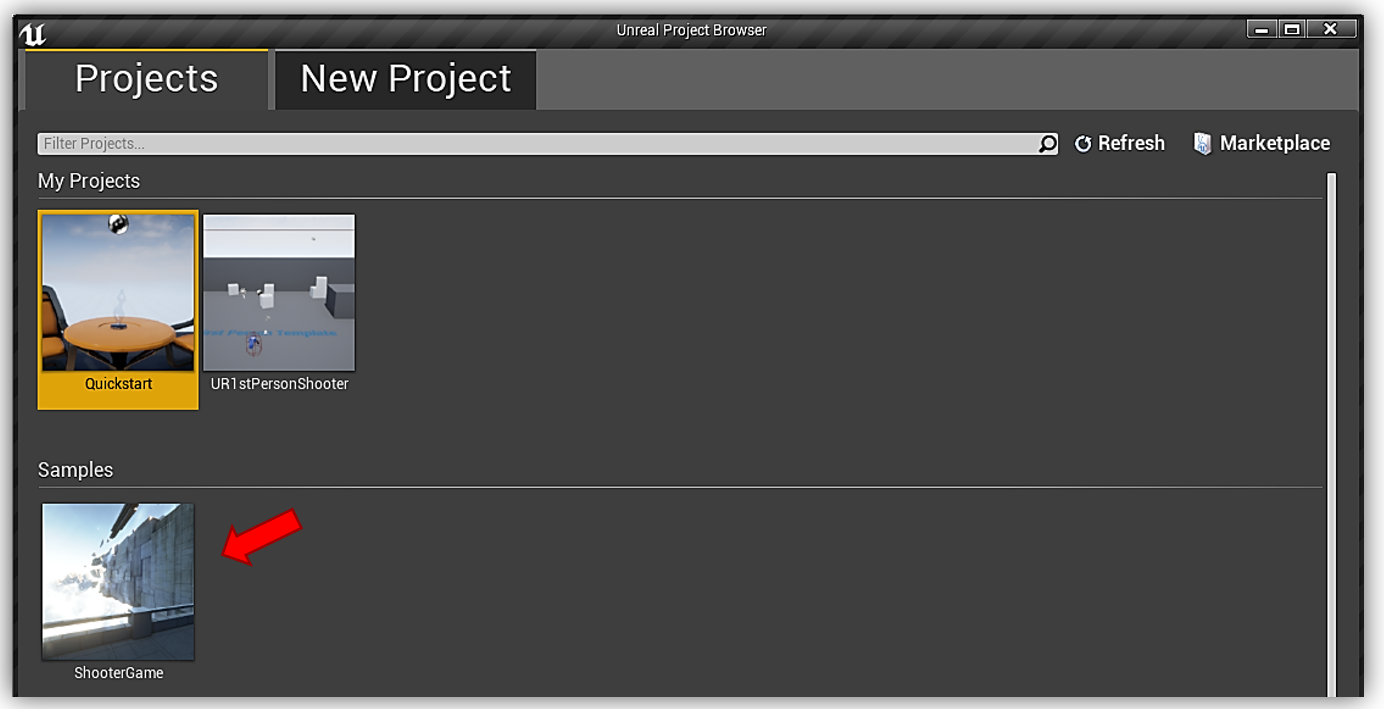 Now that I have the Multiplayer Shooter Game sample downloaded and open locally on my machine, I will need to be able to manipulate the C++ code to add the Amazon GameLift service to the UE Online Sub-System to manage the online game sessions. The Shooter Game sample is leveraging the Blueprints Visual Scripting system in Unreal Engine. The Blueprints system is a gameplay scripting system based on node-based interfaces in the UE editor, which enables game designers and content creators to create gameplay elements and functionality within UE editor.

Since it is my goal to use the Amazon GameLift C++ SDK to include the Amazon GameLift service in the game and alter the game code, I will need to create Visual Studio project solution to tie in the game and correlate the source code and any binaries from the Shooter Game to the project. To accomplish this I navigate to the context menu and select the File menu option. In the menu dropdown, I find and select the Generate Visual Studio Project Files option. 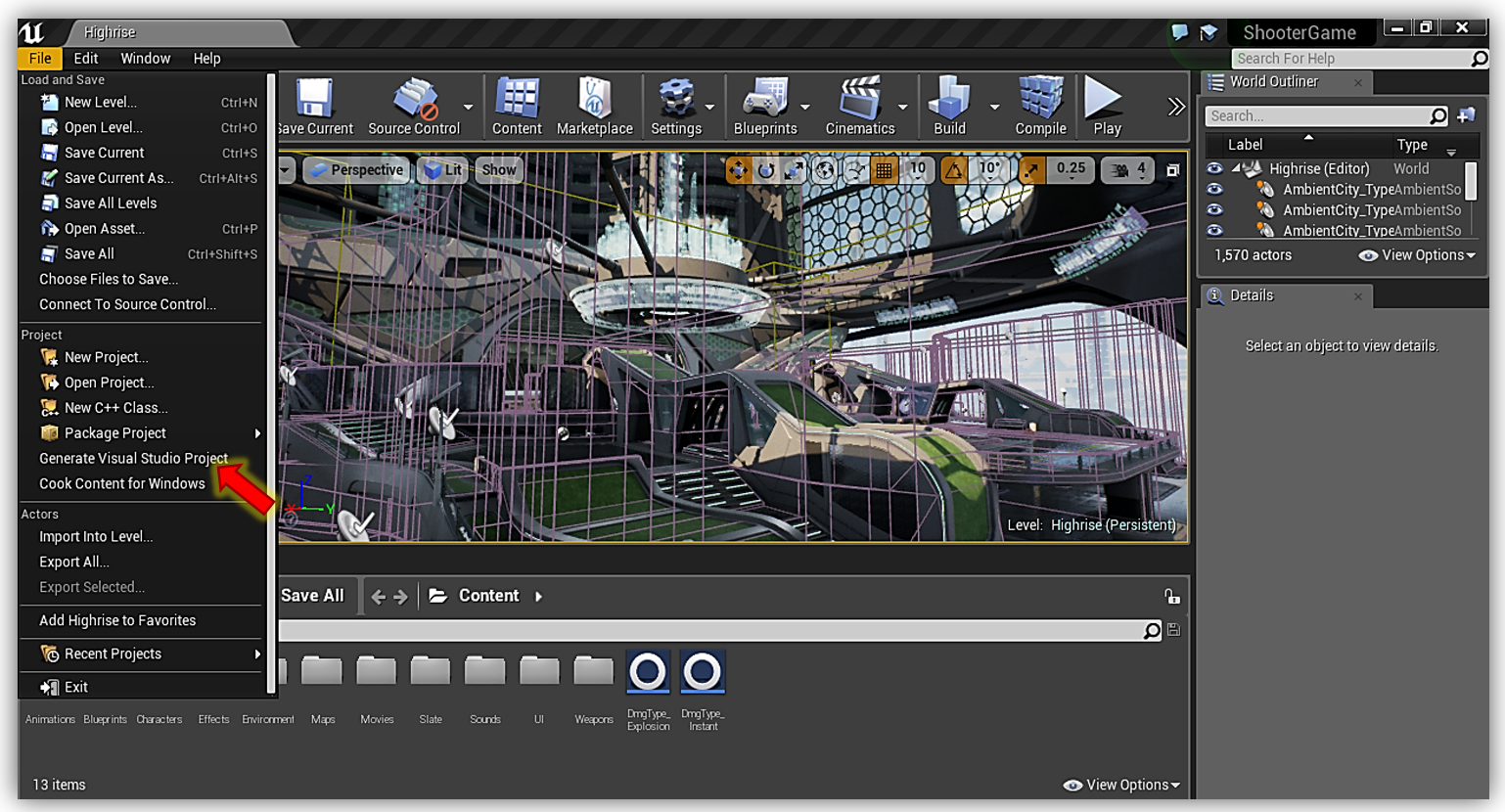 Once the project has generated, I only need to return to the Context menu and select File, then Open with Visual Studio in order to open the project and view the source code. 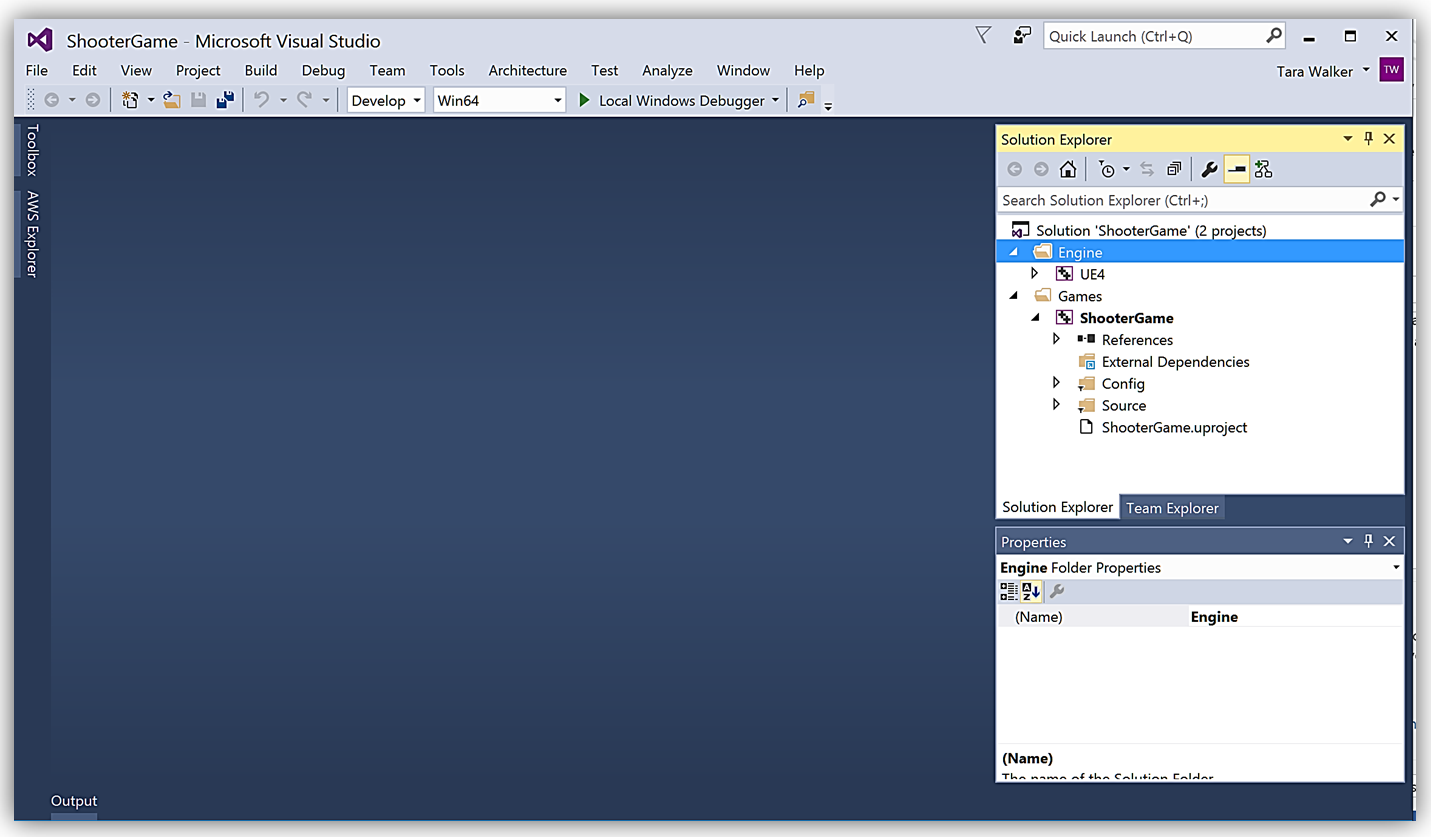 In preparation for adding the Amazon Game Lift service to the Shooter Game as the game service and for game session management, you will need to enable the OnlineSubSystem module in your project. In order to do this, open the game build settings file in the Visual Studio project. Since this game project is named ShooterGame, the build file is named ShooterGame.Build.cs and is located in the Source/ShooterGame folder(s) as shown below. 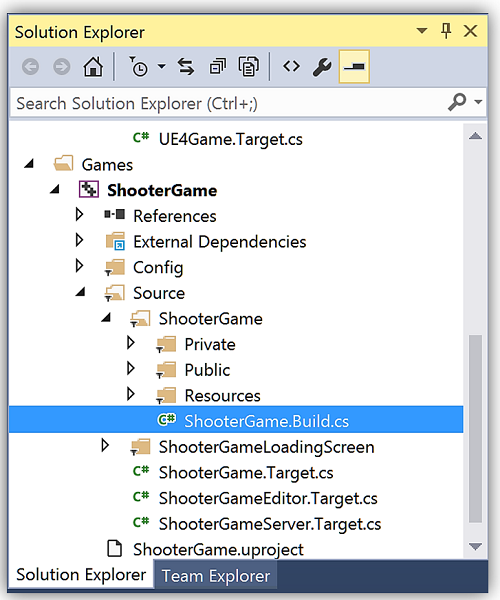 Open your Build files and uncomment the line for the OnlineSubsystemNull module. Since I am using the sample that already utilizes a multiplayer online system, my build options are set appropriately, and the code looks like this:

Now that we are set with the Shooter Game project, let’s turn our attention on the Amazon GameLift SDK. I want to leverage the C++ SDK as a plugin for the Unreal Engine, therefore, I need to compile the SDK using the using a compilation directive that builds the binaries for this game engine.

With the SDK source downloaded, I can compile the SDK from the source based upon my operating system. Since I am using a Windows machine for this project, I will complete the following steps: 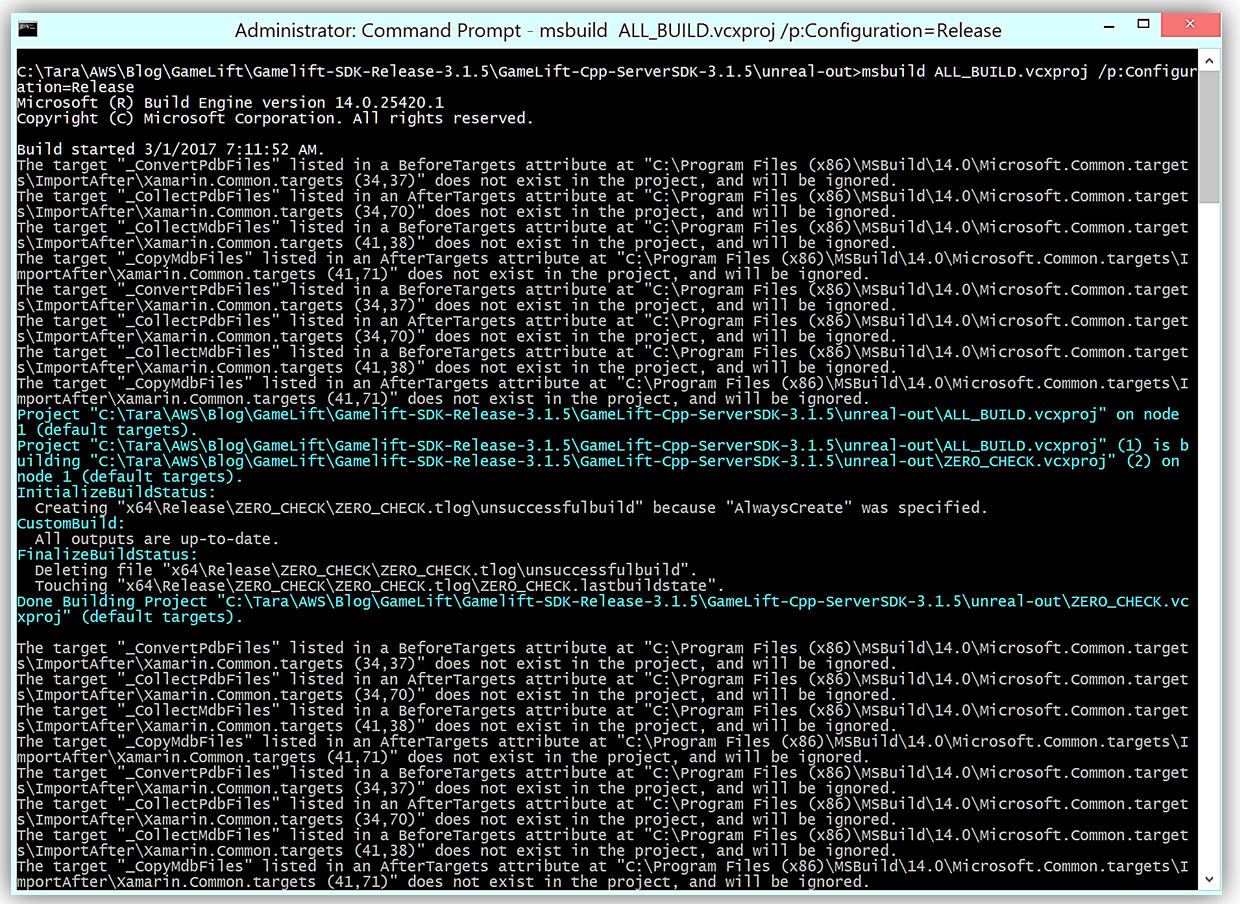 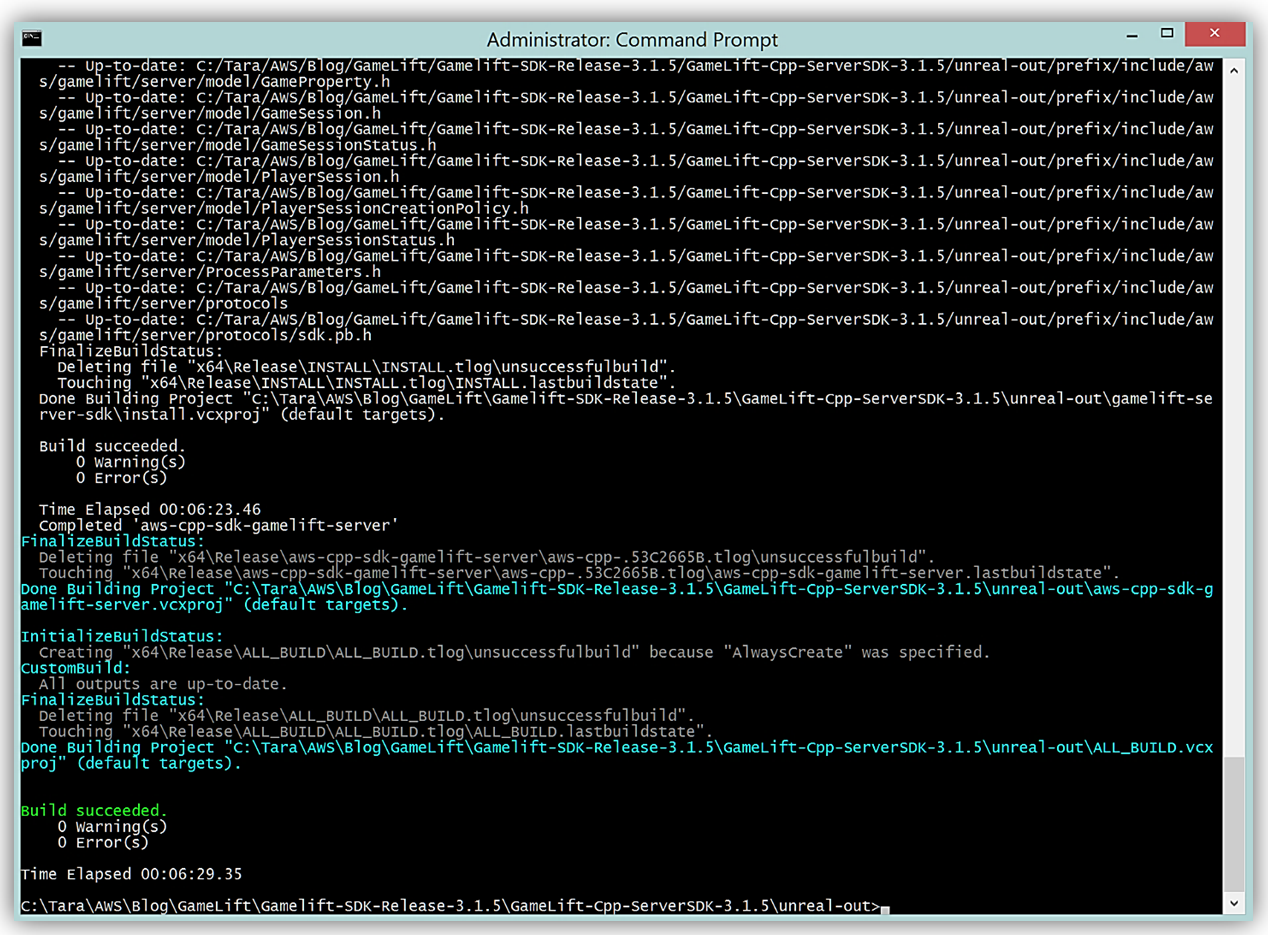 With my libraries compiled, I should have the following binary files required to use the Amazon GameLift Unreal Engine plugin. 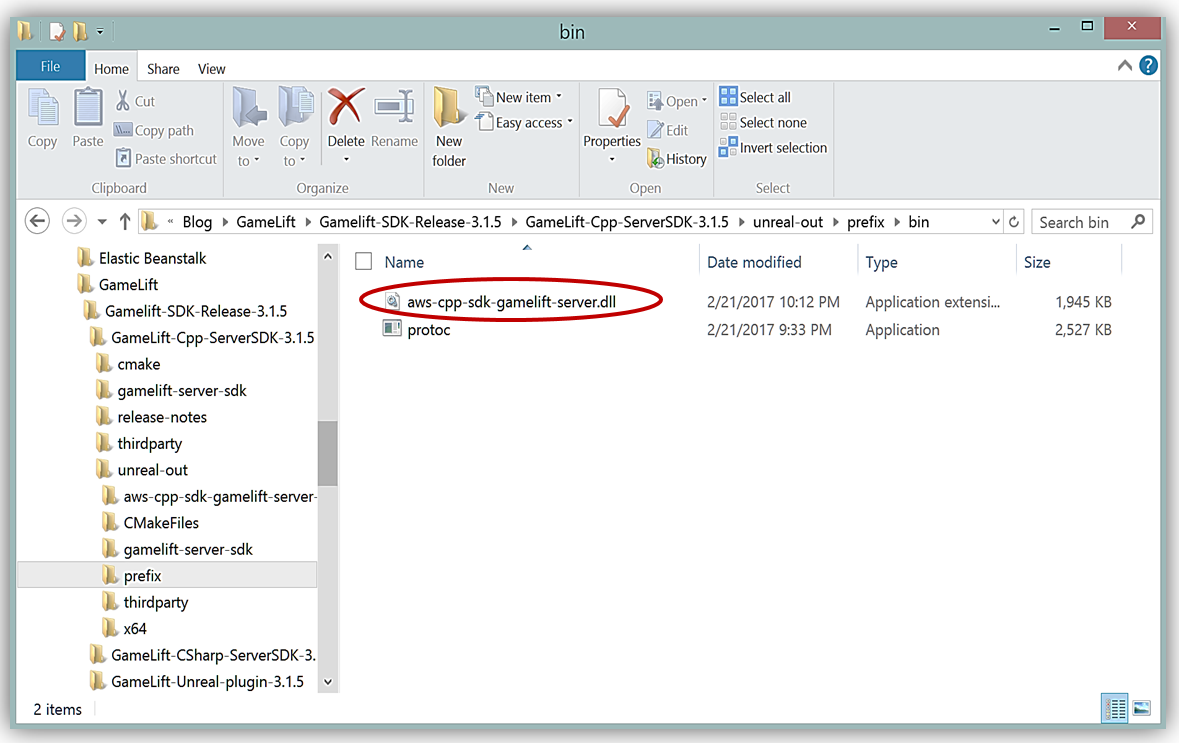 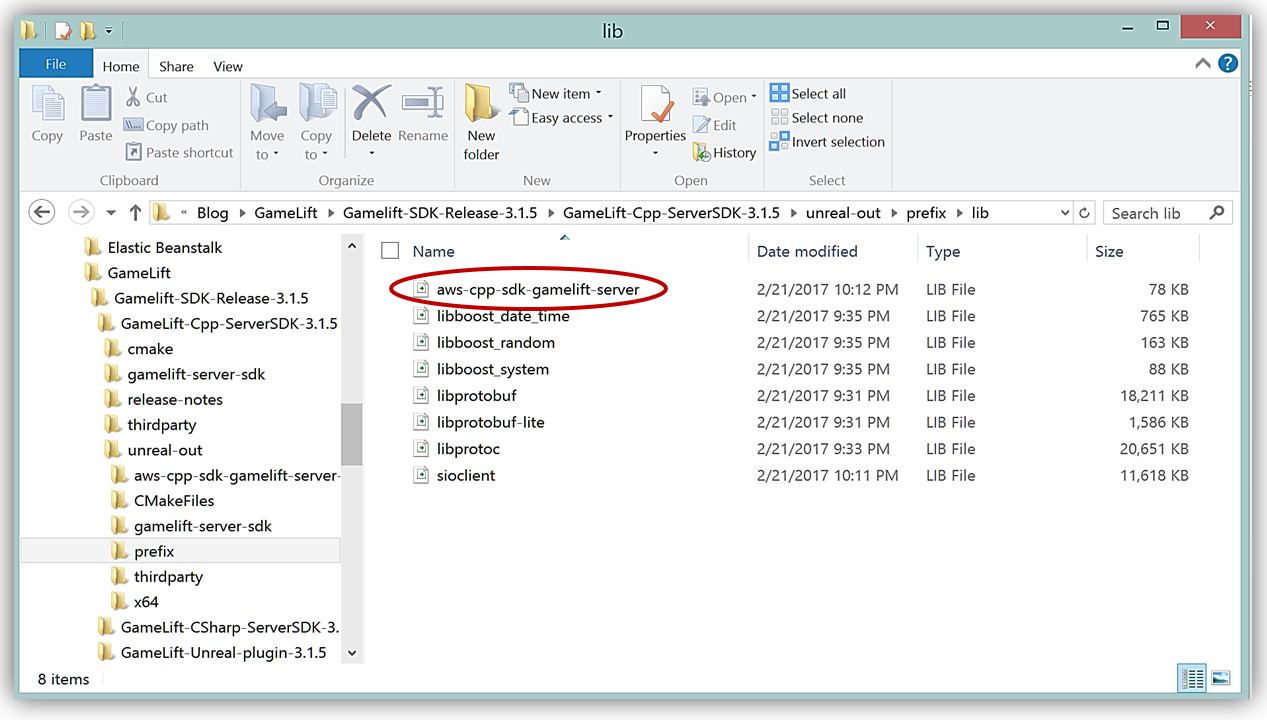 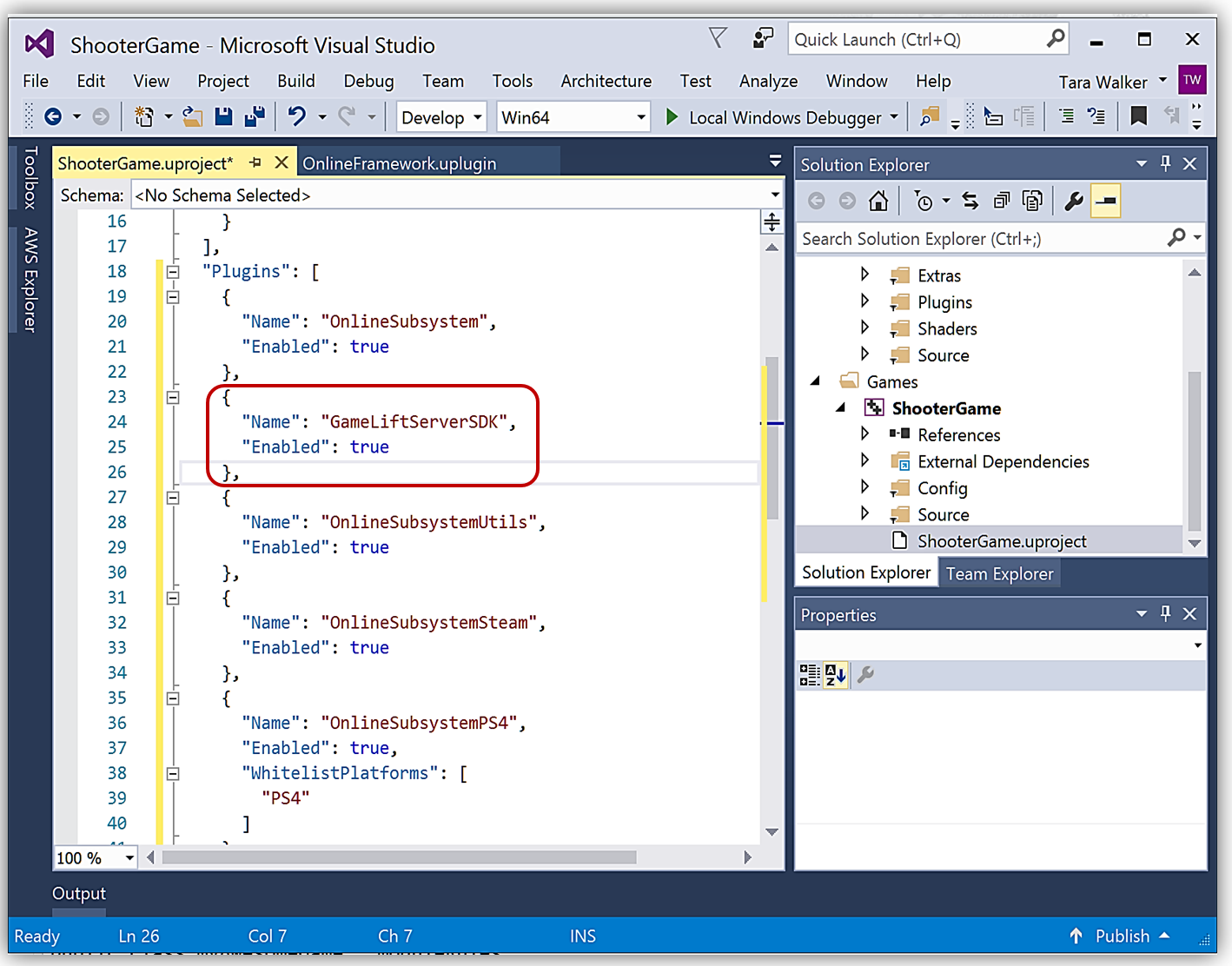 In Windows Explorer, I add a folder called Plugins in the ShooterGame directory and copy my prepared GameLiftServerSDK folder into the directory as noted by the Unreal Engine documentation on plugins. 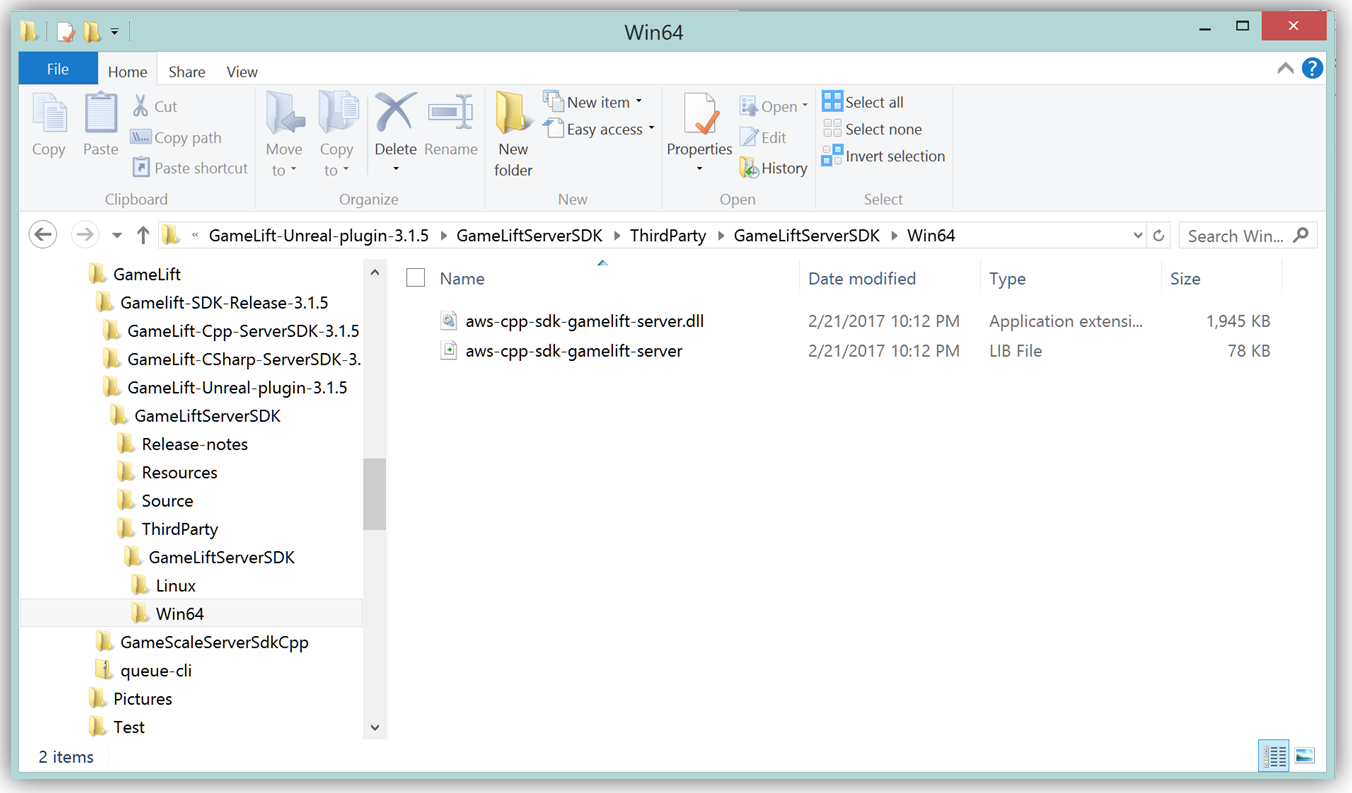 Now I will open up the ShooterGame.Build.cs file, which is a C# file that holds information about game dependencies. 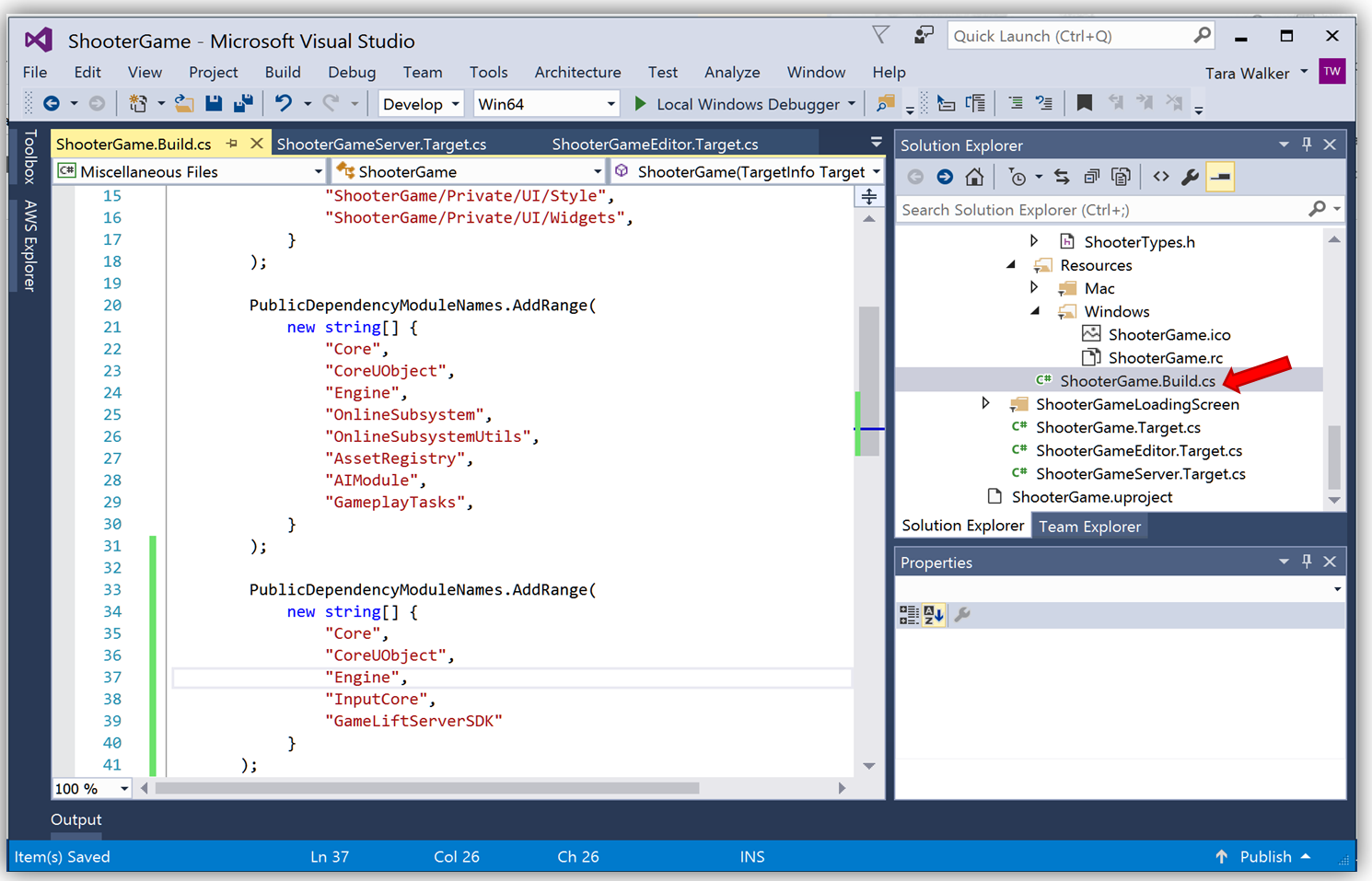 Within the file I will add the following code:

Just to ensure all is in sync with the changes made thus far, I close Visual Studio, go back to the UE Editor, and select Refresh Visual Studio Project. 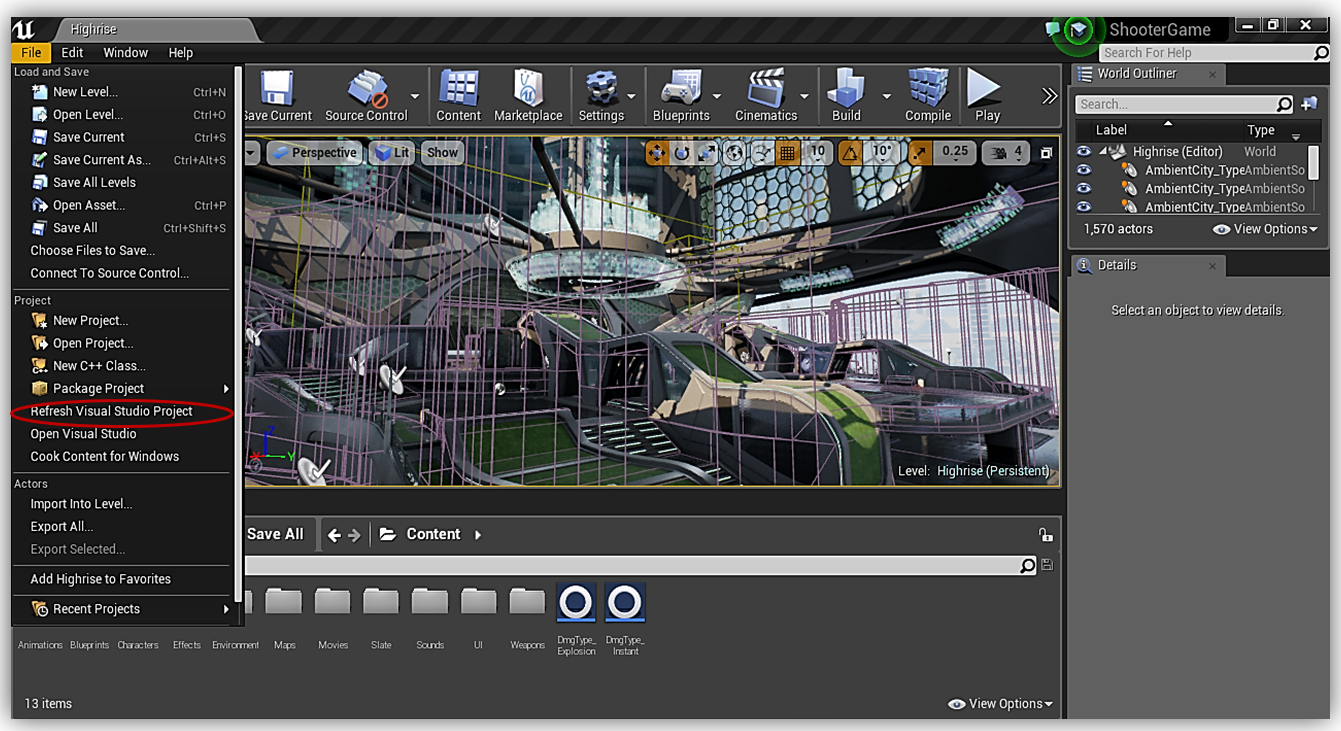 Upon completion, I select Open Visual Studio and the Plugins folder I added in the ShooterGame directory is now included in the project and able to be viewed in Solution Explorer. 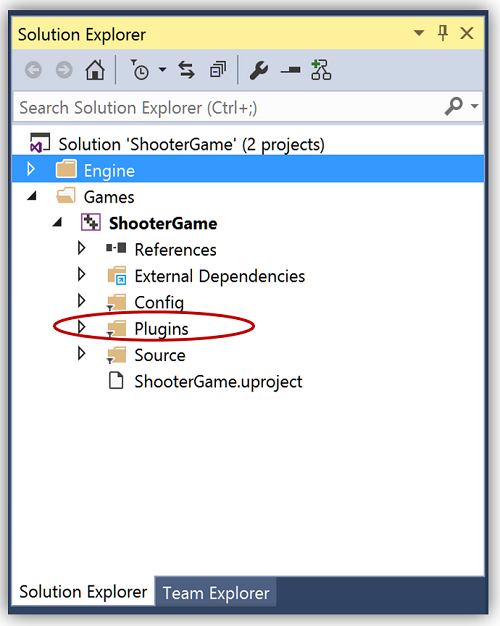 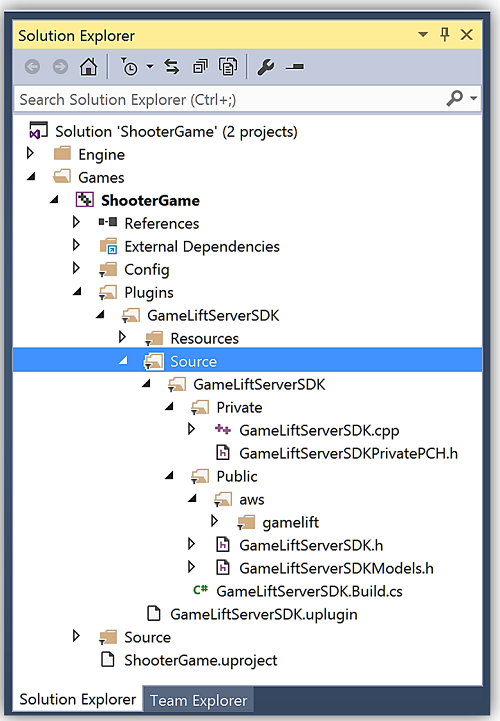 Next, I rebuild my entire solution to get the Amazon GameLift SDK binaries integrated into the project. 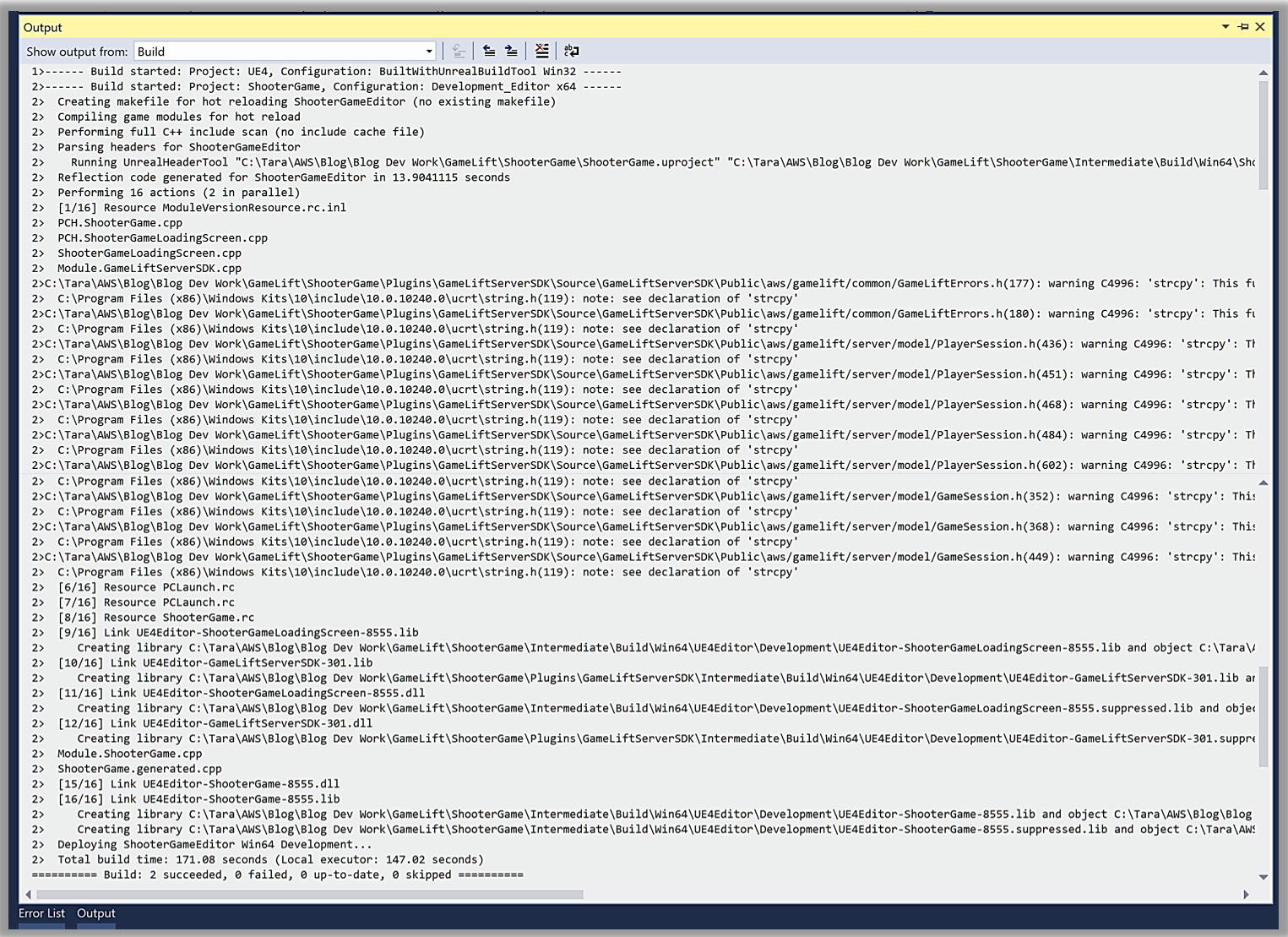 I’ll go back to the UE Editor and select Build from the toolbar to ensure the aspects of the Amazon GameLift plugin are included in my ShooterGame. Once compilation is complete, a quick visit to the Settings toolbar and Plugins option shows that the Amazon GameLift plugin is added and is recognized in the project. I will select the Enabled checkbox, which will prompt me to restart the UE Editor. I select Restart Now and allow the Unreal Engine to rebuild the game code files.

Upon completion of the build, the editor will restart and reopen my ShooterGame. 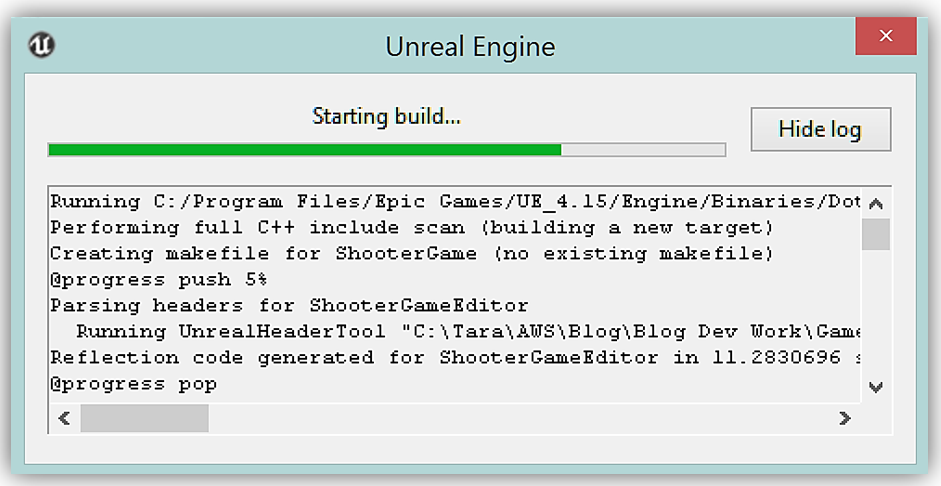 Now things are set for the use of the Amazon GameLift SDK in the ShooterGame project.

You can find an example of the code needed to add Amazon GameLift in your Unreal Engine project in the documentation here. In addition, you can learn how to build a dedicated server for Unreal Engine by following the Dedicated Server Guide for Windows and Linux provided in the Unreal Engine wiki. With these resources in hand, you should be well on your way to integrating Amazon GameLift into a game project.

We reviewed just one of the new aspects added of the Amazon GameLift managed service, but the service provides game developers and game studios with even more. Amazon GameLift enables the building of distributed games by making it easy to manage infrastructure, scale capacity, and match players into available game sessions while defending games from DDoS attacks.