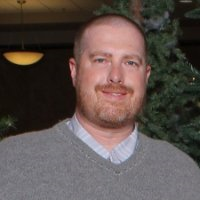 At Hendrick Motorsports, we look at IT as a competitive advantage. And it’s my job to support the company’s goals with the right technology. When Mr. Hendrick says he wants everyone—pit crews, engineers, accountants, mechanics—to work together to win NASCAR championships, we use Microsoft Teams to achieve that goal.

Most fans watching a race think it’s all about the car and the driver. But behind that combination is a ton of data, and the real question becomes how quickly we can consume and act on information to make race-winning decisions that give us a competitive edge. At the track, there’s not only adrenaline, but there’s a lot of noise, power issues and radio interference—so a lot of this collaboration has to be text driven. The persistent chat-based workspaces we get with Microsoft Teams are perfect on pit road.

In Talladega, Alabama, we have to make race strategy decisions for two of our cars. If we have a long green flag stint, when do we stop each car and take on gas and tires? The people on top of the pit box for both car crews use laptops running Windows 10 and Microsoft Teams to communicate so we don’t lose time due to a single car drag coefficient. And we can do that all without breaking radio silence, so we are not giving away secrets to the other competitors. Unlike most organizations that are separated from their competition across the city or the country, our competition is within feet of us, week in, week out. Microsoft Teams is based on the security features built into Office 365 and Windows 10, and that’s critical to keeping our competitive advantage.

Nowadays we have live radar on top of the pit box, and if we see a rainstorm coming, we get that information into Teams and chat about stopping before the race is halfway over. The reason being if the rain holds off until the race goes beyond the halfway mark, then it’s an official race, and we want to run it as if it’s not going to be canceled. Before Teams, we would send runners back and forth to a central radar location.

The communication that goes on during a race extends from the pit box to the people sitting in our transporters in the garage area to our complex in Concord, North Carolina. We have race engineers and crew chiefs devoted to individual car teams along pit road collaborating in Teams workspaces and making decisions that are relayed directly into the ears of the driver.

Then you have the crew members entering data into Teams, such as tire wear information, miles per gallon and how much fuel got added to a car. Race engineers and team managers back in the transporters watch the event, monitor communication and relay that information via Teams, straight to our personnel.

Back in Concord, there are people in the shop or conference rooms all signed in to Teams workspaces. They monitor the race to record events that the people at the track might miss in the moment. We use this to compile valuable historical data that we review later to make decisions for future races.