Engaging math students with the “Escape Room” challenge and OneNote

Since becoming a teacher five years ago, I have grown more and more excited about learning different technologies and applications to better help my students. Coming from a 14-year engineering/computer science background, I have been able to use those skills and talents to learn about different technology-based teaching tools. Microsoft Office and OneNote are just a few tools that have been helpful in guiding my students in their learning. Recently, I have been experimenting with different ways to assist them in the classroom, as I have been learning through the Microsoft Educator Community. We recently started using OneNote in the classroom, and every day we have been expanding our knowledge and enjoying the great ride together.

In early March, I met with my teammate to plan how to get 5th-grade students excited about reviewing for the end-of-year Georgia Milestone Assessment (Georgia Milestones). After about a day or so searching the web, I ran across a post about the Escape Room concept using OneNote. The Escape Room, which has gained popularity with BreadoutEDU, is a game that involve players working collaboratively to solve a series of critical thinking puzzles to open a locked box. Escape Rooms in education can also be a digital version of this same concept. I had been to an Office 365 professional development lecture session with the Fulton County Vanguard team, where a similar concept was used as an icebreaker activity, so I decided to apply it to math and see if my students would get a kick out of it. We planned to introduce a version of the Escape Room as a concluding test review activity.

Fast forward to the end of March, when we concluded our 20 hard days of review for the end-of-year assessment with the “Microsoft Day Party.” We planned a whole day of review, including a version of the Escape Room game for math in the morning and Mystery Skype for social studies in the afternoon.

I created a simple OneNote notebook with 10 standard-based review questions. Each question (tab) represented a room, and opening that room would unlock the next question. I told the students this is Escape the Classroom—a math review game. Students partnered up and each team had a device where they could access the link to the game. I explained that the only way to get to the next question is to correctly answer the previous question—the answer is the password to the next question. I told them that answers must be in the correct format to have the correct answer. If there is a comma needed, put a comma; a dollar sign needed, put a dollar sign. They had 30 minutes to escape, and the winning team would receive a prize. 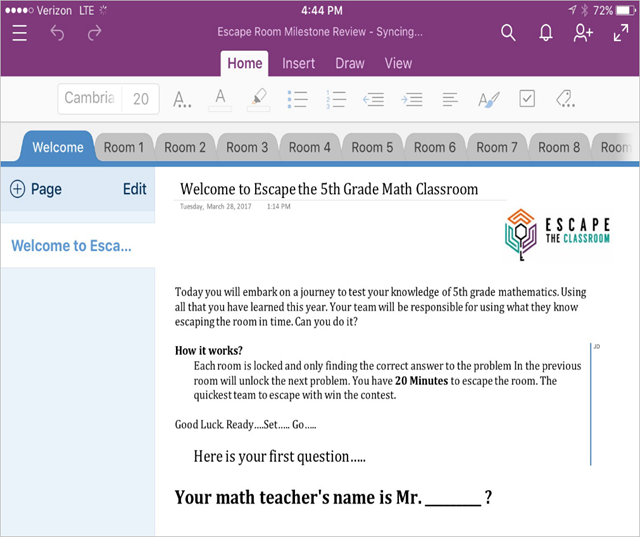 Never have I seen them so into a math review. Collaboration, discussion about the concepts. Exactly what we had hoped for, and they had fun too. A win-win situation. Everyone was so happy for the team who was the first to correctly answer all 10 questions. They won the entire class a popsicle party after testing was over.

I knew that OneNote had a never-ending list of applications and am so glad I found this one. Of course, next time I will put more into the design of the game and even embed videos and other types of clues. But for now, mission complete. Can’t wait to tell you how the Mystery Skype went.